Very fine psychedelic/prog album on London. Eight members of the Detroit Symphony Orchestra make up the group...heh, even Detroit's classical musicians were rocking hard! You will find plenty of garagy keys, hard fuzz guitar as well as jazzy stand out horns and soulful singing on this record. On the album jacket they call themselves "fusion rock" but I wouldn't go around comparing them to Mahavisnu Orchestra or Santana... Symphonic Metamorhosis is more along the lines of The New York Rock & Roll Ensemble and Ten Wheel Drive or maybe like all the Chicago blues-psych bands. This album is a pretty interesting listen, recommended.
from Rym

Released right in the middle of the Kraut fusion boom of the late 1970s. Psi definitely evokes Kraan, Munju, RMO, Missus Beastly, etc... Apparently Psi impressed someone high up, as their sole album was on the high profile Bacillus label, besting many of the private presses of the era. For me, there are a couple of things that separate Psi from the pack. One is the fantastic rhythm section, propelling the tracks forward at an exciting rate. The other is the terrific production. Clearly a big budget was behind the recording. Recommended to fusion fans who enjoy a high amount of melodic content.
From RYM

Instrumental hard rock reminiscent of the Doors minus Jim Morrison. The band does not try to reinvent the wheel, and the music benefits from this. These guys are excellent instrumentalists, but they are never showy or flashy. They only play fast enough to get the job done.
The only thing I could say to detract from this would be that sometimes it maybe could use a singer. But we are probably lucky not to have a wack-ass 1973 Swedish classic rock singer here, mucking up these splendid arrangements.
from Rym
Link
Pubblicato da Betelgeuse a 12:47 AM Nessun commento:

A sticker on the front cover mentiones this: "Unrealesed original 1977 recordings featuring pre-Steve Hackett, pre-Hawkwind, ex-Enid". Well, at least this should appeal to some progheads I presume ...?! The most prominent member on this CD is Nick Magnus, once embellishing The Steve Hackett Band with his wide range of vintage keyboards (Mellotron!!). On most of the five compositions Nick delivers varied and pleasant keyboard work: jazzy play on the Fender Rhodes electric piano, swinging notes from the exciting Hohner D6 clavinet and nice work on the Vox String Thing and Mini Korg 7005. Guitar player Mark Easton often evokes a certain Stephen Hackett (flowing, melodic and frequent use of the volume pedal), especially in the titletrack. In Some Like It Crunchy fiery electric guitar is followed by wonderful strings and a long and exciting synthesizer solo, accompanied by acoustic rhythm-guitar ("did anyone say Cinema Show?"). The final part delivers great guitar and pleasant clavinet runs. That clavinet is also omnipresent in the tracks Little Finger and The Celebrated Court Jester (in both blended with beautiful strings and varied guitar work). The rhythm- section does a good job (Robbie Dobson once joined The Enid and Hawkwind), the musicians on this CD are outstanding!
From ProgArchives

A wide range of mat'l, from fairly heavy, to fairly light, but always still a bit heavier than pure pop. There are some slow, blues driven cuts too, that feature melodramatic vocals. Most of these songs feature catchy song writing, with nice vocal harmony, organ, and some psych influences. A bit of a sleeper, and vaguely reminiscent, at times of label-mates Damnation. Grades - 1 A-, 2 B+'s, 4 B-'s, and 3 C+'s.
From Rym

Few news about this band; good mix among different generes (some psych touches with rock and folk arrangements) Worth a listen!
Link1
Link2
Pubblicato da Betelgeuse a 11:13 AM Nessun commento:

Great early hard rock with roots (and parts of the stem) in psychedelia. The sparseness of the sound coupled with brilliantly performed vocals makes for perhaps the finest american hard rock album of the late sixties. It contains great rock tracks such as "I Don't Believe In Statues", and more experimental pieces like "Looking Back", with its' shifting meters and proto kraut parts. A "lost" classic.

Grungier, thicker and better than the debut album, Mount Rushmore sound a bit more serious and stoned here. Again, it's hardly classic stuff, and the production is pretty clunky, but I can't slam it too hard.

This much-maligned album isn't nearly as bad as you may have been led to believe. It's actually a rather fascinating aural document, mostly for the fact that it seems to be an important missing link in the Jimmy Page/Zeppelin story. First off, there's Lord Sutch himself. His voice is definitely a liability, and he's easily the weakest-link in this otherwise pretty stellar chain. I suppose it wouldn't be so bad if he was a decent lyricist, but unfortunately I've seldom heard lyrics as banal and insipid. The titles pretty much say it all in this regard: "Wailing Sounds", "Flashing Lights", "Thumping Beat"....you get the picture...Fortunately, most of the backing tracks themselves are great - at least the ones featuring Page and Bonham, which constitute roughly half the album. They almost sound like Zeppelin outtakes, and I get the feeling that Page may have used this project to hone his studio craft. The drums on the Page/Bonham tracks are straight off of Zeppelin II, and sound fat, thick and heavy - ditto Page's guitar parts. These tracks are worth the price of the album alone. Sadly, the same can't be said for the remaining tracks. Apparently they were recorded in London (the Page/Bonham tracks were done in L.A.) and feature Nicky Hopkins, Jeff Beck, and Noel Redding, among others. Compared to the Page/Bonham tracks they sound incredibly muddy, thin, and frankly, amateurish - notwithstanding Beck's always interesting fretwork.
So, to sum up, this album is probably worth it for the Page/Bonham tracks alone, but the remainder is fairly hit-or-miss. I'd recommend it to hard-core Zeppelin fans however. For everyone else - you've been warned.
from RYM

Wow what a great LP! Hearing 'Page/What Would You Do?/'Father Son' still blows me away all these years later. Great band from London, Ontario Canada. I grew up in Toronto, and these guys played at one of my high school dances. Stupid me, I didn't go... Probably had a fuckin' pimple or something.
Though my face was clear for 'Bush', 'Steel River' and 'Crowbar'! Lol
I'm not sure if this LP is available on CD yet or not. I've had a few copies on vinyl over the years, and they've seen their share of my platter.
I was floored when I walked into a local store here called 'Recordland', and found 4 copies. Three were lumped together, and in pretty decent shape. The fourth was kind of hiding, and separate from the others, still sealed, and well worth the $20.00 Canadian I might add. There was also a sealed copy of their 'Orbit' LP for $20.00, and of course my drooling continued!
The opening track, 'Africa' was a minor radio hit in Canada, and maybe the US as well.
Just an incredible guitar drenched Canadian heavy rock masterpiece! The previous review sums up everything else I'd like to say! So, if you're ever in Calgary, check out 'Recordland'. They have several hundred thousand LP's in stock, and over a million LP's unfiled in the back! The store is reminiscent of 'Alladins Cave'. I'm quite sure they'd still have at least a half dozen or so 'Thundermug' LPs just sitting there.
Warning; The US issue of this LP appears the same at first glance, however the tracklisting is completely different. The US version is a compilation of Thundermug 'Strikes', and their 2nd LP 'Orbit'.
Look for the 'Axe Records' pressing, AXS 502, because this is the 'true' version.
The US compilation LP of the same name is 'BN3264'.
from RYM
Link
Pubblicato da Betelgeuse a 6:11 AM 3 commenti: 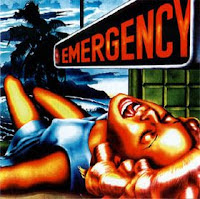 Discover all non-mainstream music from all over the world!